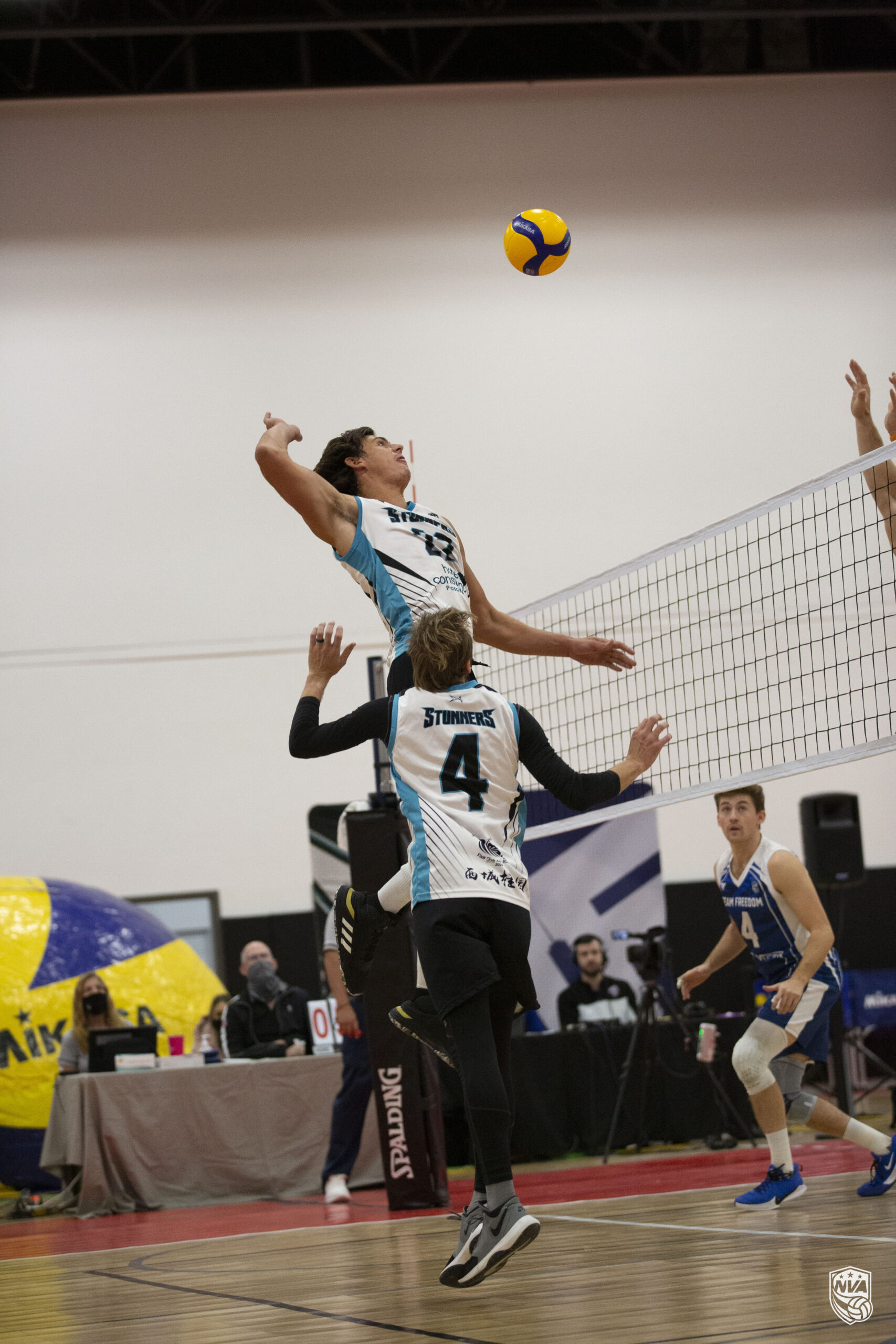 Arguably one of the most tenacious middle blockers in the NVA, Nick Amado is known for his ability to give 110% of his energy to every play he makes. His presence on the court during the 2020 NVA Showcase helped make the OC Stunners an unstoppable force throughout the entire tournament, earning him all-tournament team honors. Although the Stunners didn’t clinch the championship, falling in the finals to the Utah Stingers who were led by Russell Holmes and Jake Langlois, Nick is no stranger to unforgettable MVP finals performances.

During his time as a starter for Cal State Long Beach, Amado took home two back to back national championships against two powerhouses, UCLA (2018) and the University of Hawaii (2019). Although not one of the three frequently mentioned players (DeFalco, Ensing, and Tuaniga), Amado was an absolute catalyst in both of LB State’s title runs. It was always evident how he was driving the team’s focus and determination. Against UCLA, Nick scored the final attack to finish the grueling five-setter and demonstrated a feverish performance at the net, seemingly getting a touch on every block. You can catch both of these memorable matches on Youtube:

Born and raised in Aliso Viejo, CA, Nick attended Aliso Niguel High School. Growing up in Southern California, he enjoyed other hobbies such as playing disc golf and snowboarding. From high school, Nick attended Orange Coast College, following in the footsteps of so many other great players in Southern California. In reality, Nick’s progression is the perfect testament to the benefits of Junior Colleges. Being able to spend more time developing as a player before playing entering Division 1 put him a step above all the younger players. As an All-American and part of the All Big-West Team, his accolades make it more evident that going straight to a four-year institution isn’t always the best path for players to take.

“Some of the most influential people in my life are Travis Turner (OCC) and Alan Knipe (LBSU), who were both coaches I had and were instrumental in making me not only the volleyball player I am today but also the man I am today” Amado stated.

Nick has continued to grow and excel as a player, getting the chance to train with the USA National Team over the summer of 2019. The squad went on to take the Silver medal in the NORCECA Champions Cup that summer. Later on, for his 2019/2020 season, Nick traveled to Spain, playing with Unicaja Costa de Almeria, and won silver in both the League Cup and Supercup Tournament. He hoped to continue his success after signing a contract to play in Finland until COVID dashed his plans, keeping him back on home soil with the NVA. Outside of his time working hard in the Stunners gym, Nick worked hard to grow 4-man beach volleyball in Southern California. During his free time playing down at the beaches of Corona Del Mar, you can usually find him with other big names like Iranian National Setter Saeid Marouf.

“I love the fact that America is finally getting the indoor league it deserves. Volleyball has grown exponentially over the past ten years and is one of the fastest-growing men’s sports, both for youth and collegiately. It also gives the volleyball players here in America an avenue of professional playing, without the stresses of going overseas to play, which is nice!” said Amado.

The 2021 season will soon be starting, and the Stunners are sure to do big things with Nick Amado in the front row! Make sure to follow the team (@stunnersnvausa) and Nick (@namado25) and give them some love on their posts! Also, check out the team website to see more about Nick and what’s going on with all the team’s players (stunners.nvausa.com).

previous
Stingers Outplay Stunners In 4 Sets to Win 2020 NVA Championship Title
next
Player Profile: Shayne Beamer
PRIVACY POLICY
TERMS & COND...
We use cookies to ensure that we give you the best experience on our website. If you continue to use this site we will assume that you are happy with it.OkPrivacy policy