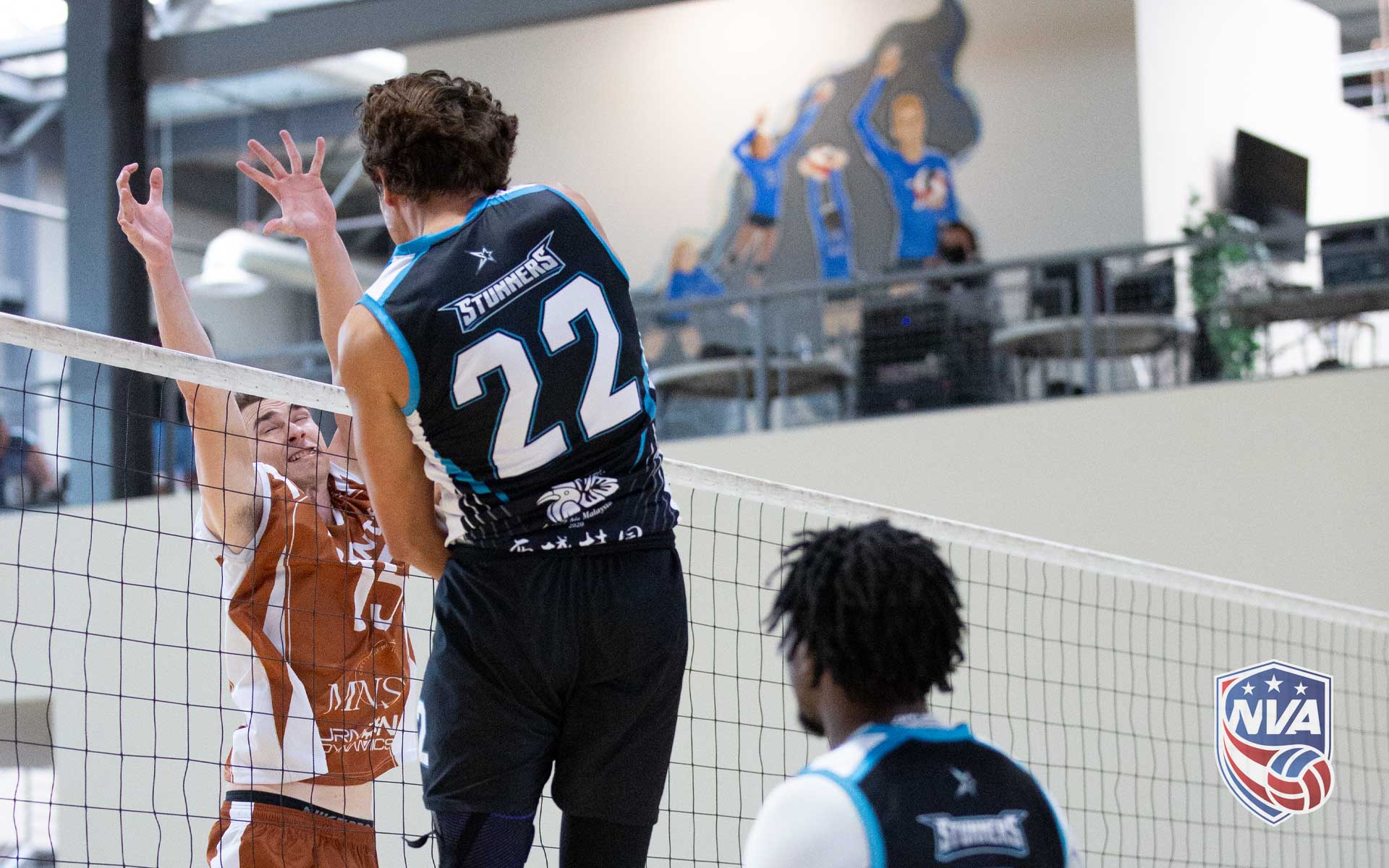 Stunners had to make a last minute lineup change because their starting Libero, Jake Hurwitz, had to work. The Stunners assigned OH Matt Hilling to play Libero and inserted rookie OH Antonio Aguizola to play OH. Despite their best efforts the new lineup didn’t fare well for the Stunners in the first two sets. In the third set Hilling and Aguizola changed positions. But like the first two sets the Stunners never got into a good offensive rhythm, which resulted in many hitting errors and gave Southern Exposure free points.

Stunners made several valiant efforts in each set to launch a rally but each time late in the sets they fell short due to hitting errors. OPP Jair Sanchez Santiago had a leading 16 kills, Joey Jarvis 8 kills and middle blockers Nick Amado and Kevin Gear each had 2 kills. Hilling had two kills but they came in the third set. Overall the Stunners hit a dismal 36%.

Southern Exposure was led by a well balanced offense. Setter Derek Sullivan utilized all his attackers. OH Kevin Rocklein led the team with 8 kills and OH Jakeb Ciesla, and MB Payne Langston each had 5 kills. And Sullivan also had 5 kills. Southern Exposures’ blocks, which occurred at crucial points late in the sets also helped in their win. Southern Exposure had a total of nine blocks,  Ciesla with 4, Rocklein 3, Girshfeld and Langston 1. Although Southern Exposure’s hitting percentage was less than the Stunners at 36%, they scored points and sided out at pivotal moments in the match that hampered the Stunners ability to make a comeback. And the Stunners didn’t help their cause with a multitude of hitting and service errors. All three sets won by Southern Exposure ended on Stunners’ hitting errors. The final scores were 25-23, 25-20 and 25-22.

Stunners Libero Jake Hurtwitz joined the team, which made Matt Hilling available to play OH. The other lineup change was Nick West at MB. The Tyrants also made a lineup change from Friday’s match and started Anthony Robinson at OH and Ryan Maune at MB.

Stunners’ setter Spence Andrews didn’t waste any time setting Hilling for the first kill, followed with kills by Nick West, Joey Jarvis. Tyrants countered with kills by Austin Lovett, Tim Johnson and Robinson to keep the score close. At 13-13 Hilling had a run of three kills and the Tyrants answered back with a series of blocks by Johnson, Maune and Robinson to keep the score tied. But a run of three kills by Jarvis gave the Stunners a three point lead at 21-18. Good Tyrants’ defense and kills by Johnson and Lovett tied the score at 21-21 and then Tyrants took the lead on a kill by Lovett 22-21. A kill by Hilling tied the set and started a service run that began with a Tyrant overpass and kill by Jarvis that gave the Stunners a 24-22 lead. Johnson followed with a kill to 24-23. And Jarvis won a joust to win the set for the Stunners 25-23.

In set two Javier Santiago started hot with 2 consecutive kills followed by a Nick Amado ace. Tyrants countered with a Grasso kill, block by setter Derrick Sullivan and two consecutive kills and a block by Tim Johnson. Andrews set Hilling for two consecutive kills. And after a West ace the Stunners had a three point lead at 11-8. Tyrants came back with kills by Robinson and Johnson and a block by Sullivan and tied the score at 14-14.  The rest of the set turned into a slugfest with a Stunner run of kills by Hilling and Santiago. Tyrants answered with kills by Grasso, Robinson and Johnson to take the lead 24-22. Santiago followed with two service aces to tie 24-24. But the Tyrants sided-out on a Johnson kill and then won the set on a transition play and tip kill by Johnson.

Despite the tough second set lost the Stunners came out firing. Andrews decided to feed his outside hitters first.  Hilling, Santiago and Jarvis. Tyrants’ setter started his offense with Johnson and Grasso and Robinson added a block to take the lead 8-7. In the next nine Stunner possessions, Hilling had six of the kills and one each from Santiago, Jarvis and Amado. On the other side of the court Johnson, Robinson and Grasso had 2 kills each; and OH Daniel Jacobs and Maune each had a kill. With Stunners ahead 15-14 Nick West had two consecutive blocks and an ace to give the Stunners a 24-20 lead. Like the last set the Stunners struggled to side out and Tyrants took full advantage and tied the score with a Robinson kill and block; and a Johnson kill and Maune block. Amado and Hilling answered with one kill each and tied the score at 27-27. The Tyrants won on the next two points on a Grasso kill and block 29-27.

Both teams sided out well in the beginning of the fourth set. Stunners scored with 4 kills by Hilling, and one kill by Jarvis and a block by West. Tyrants answered with two kills by Grasso and one each by Robinson and Lovett led to a 6-6 tie. At 10-10 the Tyrants took a three point lead with a block by Maune and kills by Grasso and Johnson. The Stunners countered with two Hilling kills, one West kill and block by Santiago to tie the score 16-16. But the Tyrants’ defense gave their offense opportunities to build a three point lead at 21-18. The Stunners only scored one more point and the Tyrants closed out the match with a kill by Daniel Jacobs, ace by Maune, block by Grasso and  the match ended on a Stunners’ net call 25-19.

In the loss Hilling led in kills with 22, Santiago 12 and Jarvis 9. The Stunners hit 39%. For the Tyrants Johnson and Grasso tied with 18 kills each and Robinson added 6 kills and the Tyrants hit 45%.

Stunners’ setter Spencer Andrews injured his groin on the last point of the match against the Tyrants on Saturday so Matt Hilling, one of the rare versatile volleyball players played setter. It was the third different position Hilling played in this weekend’s NVA Event. In the other two matches he played Libero and OH. The Stunners also started four middle blockers, two of whom played different positions. Nick Amado at OH and Nick West OPP. Antonio Anguizola played the other OH and Shayne Beamer and Kevin Gear at middle blockers. The strategy behind this creative lineup was to rely mostly on big hitters and blocks rather than digging and covering defense.

The Stunners’ creative big men line up claimed an early lead with a kill by West and one block each by Gear and Beamer and a dump by Hilling to 8-7. Team Freedoms’ points came from kills by Joe Norman, Christopher Nugent and Christoper Vaughn. At 12-12 Amado sprained his ankle and Stunners substituted him with Joey Jarvis. The Stunners hitters struggled to find the court and Team Freedom took the lead on a Norman and Matt Seifert block to 16-13. A string of Team Freedom errors and kills by Stunners’ Jarvis, West, Beamer and Anguizola tied the set at 20-20. But the Stunners’ hitters again struggled to hit balls inside the lines and Team Freedom closed out the set with kills by Vaughn and Norman and won 25-23.

In set two five Stunners’ hitting errors gave Team Freedom an early 8-4 lead. During this run, Stunner’s only two scores were a kill and block by Jarvis. For Team Freedom Seifert and Norman each had one kill. At 11-5 Stunners substituted Chris Chapell’e for Anguizola. Errors continued to plague the Stunners and Team Freedom added to their lead with kills by Norman, Nugent and Seifert; and Vaughn with an ace and Seifert a block to 16-8. At 18-11 Stunners substituted Dillion Emery for West. Despite a kill by Jarvis and a Hilling block, Team Freedom added two more points to their lead at 22-12 on kills by middle blocker Mikheil Hoyte and Norman. But the Stunners didn’t give up. Emery scored four of the next five kills, Jarvis added and kill and Chappelle’s kill and service ace cut the lead to 24-20. But Team Freedom sided-out on a Seifert kill and won the set 25-20.

While Stunners started off hot in the third set with kills by Emery and two service aces by Chapelle and West, Team Freedom struggled to pass the ball. But Stunners’s errors and two kills by Vaughn before the first media timeout gave Team Freedom a two point lead before the first media timeout at 8-6. Stunners bounced back with consecutive kills by Jarvis, kill by Chapelle and block by West to tie the set at 10-10. Team Freedom took a two point lead after a Nugent and Norman kill to 12-10. Both teams sided out with kills by West and Jarvis for Stunners; and Norman, Seifert, Vaughn kills and two blocks by Vaughn and Hoyte for Team Freedom. At 18-17 a dig by Libero Jake Hurwitz forced a hitting error by Team Freedom and tied the set at 18-18. Then a set dump by Norman found a hole in the Stunners’ defense that deflated their efforts for a comeback. Team Freedom followed with a block from Hoyte and kill by Norman and took a 21-18 lead. After Stunners called a timeout, Jarvis scored on a kill to 21-19. Stunners struggled to side-out and Team Freedom scored the next three points with kills by Hoyte, Norman and Nugent to 24-19. After Stunners called their second timeout, Emery hit the ball out that gave Team Freedom a 25-19 win for the match.

Team Freedom finished the weekend with a 3-0 record and Stunners 0-3.

previous
NVA Announces New Tournament Sight for April, May, and June.
next
Corey Chavers is Ready to Go
PRIVACY POLICY
TERMS & COND...
We use cookies to ensure that we give you the best experience on our website. If you continue to use this site we will assume that you are happy with it.OkPrivacy policy