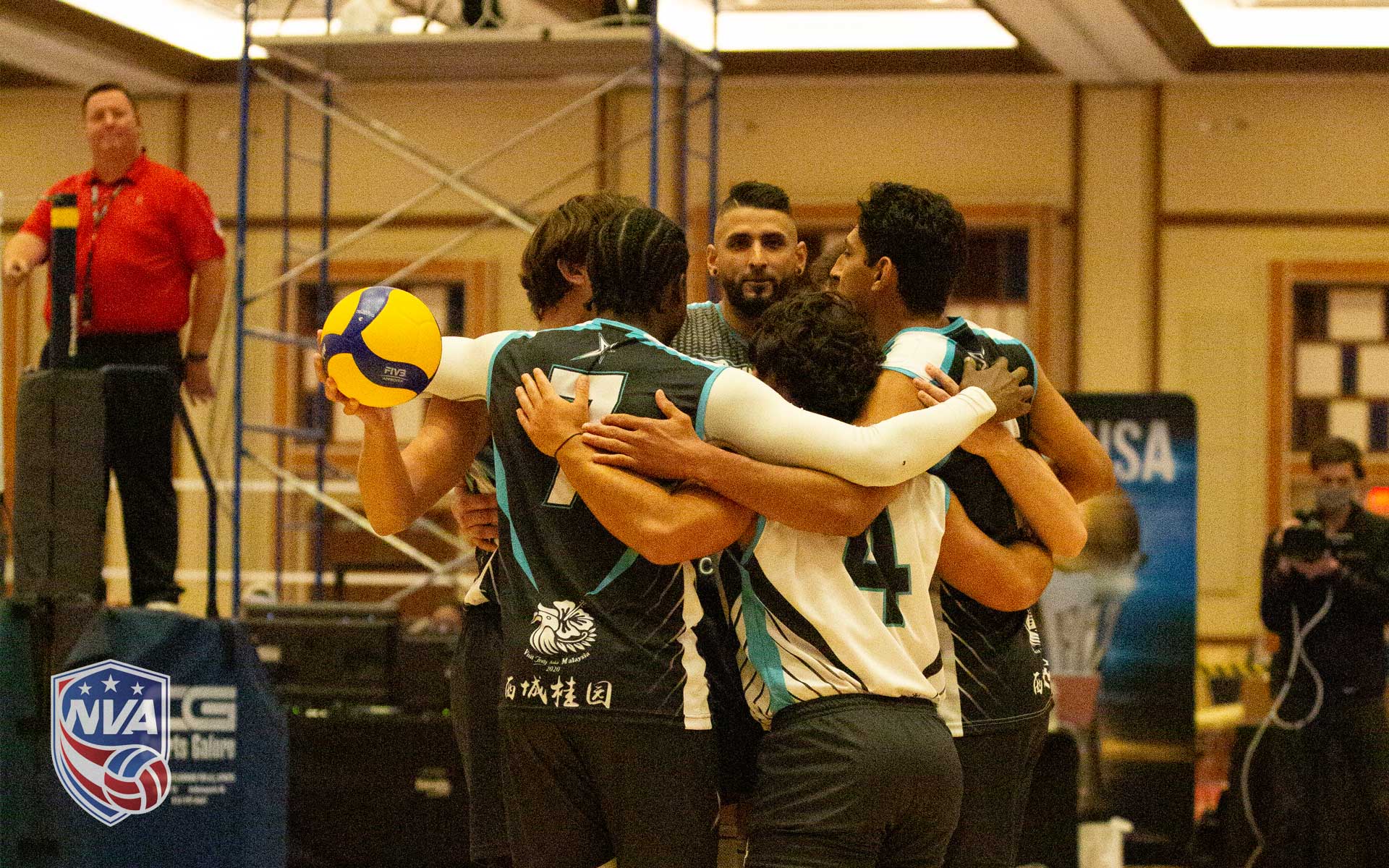 The OC Stunners, coming off a 0-3 start in the first tournament face off against the 2-1 Ontario Matadors. The Stunners started off with an ace from ST43, which was then followed up by an error from Joey Jarvis starting the game off 1-1. The Matadors and Stunners go point for point until a kill by Joey Jarvis takes the teams into the technical timeout, 8-7 Stunners. Joey Jarvis then gets an ace and back to back blocks by Corey Chavers sends the Matadors into another timeout with a score of 12-7. A kill by Alvarao Ascues and Jesus Serrano, followed by a block by Gabriel Cruz allowed the Matadors to close the gap to a score of 12-13, until Corey Chavers answered back with a sideout. The Stunners then create a significant gap led by a block and a kill by Nick Amado, 18-13. The Stunners then maintained their lead until a couple of defensive stops, ending with a kill from Mauro Isaac brought the score up to 23-20. Nick West and then Nick Amado both had kills to end the game 25-21.

Set 2 started off similar to set 1, where both teams were trading points until the technical timeout where the Stunners led 8-7. Jair Santiago then committed a block error, which was followed up by a service ace from Gabriel Cruz which tied the game up at 9-9. Three errors from the Matadors and a block from Nick West gave the Stunners a 14-9 advantage. The Matadors responded with two kills from Mauro Isaac and one from Martin Petris, but the momentum was halted after a massive block by Corey Chavers to go into the technical timeout, 16-12 Stunners. After the timeout, the Stunners picked up momentum with two aces by Joey Jarvis, and two blocks by Nick West to secure a 20-13 lead. The Stunners then cruise to an easy win with two kills by Nick Amado and three kills by Jair Santiago.

Set 3 also started off similar as the first two sets, where both teams traded points into and past the technical timeout. It wasn’t until 9-9 with the Matadors leading that the Stunners started making some plays, with a block by Nick West to grab a 10-9 lead. The Stunners then created some separation again with kills from middle blockers Nick Amado and Nick West, partnered with kills from Jair Santiago to create a five point lead at 18-13. Mauro Isaac and Martin Petris fought hard though, both notching kills to try and rally the team, but it wasn’t enough to catch up to the Stunners offense, final score 25-19.

Set 1 started off heavily in the Stunners favor, as Randy Morales went back and knocked down two aces to allow the Stunners to have some early momentum. Kills by Chris Chappell’e and two from Nick Amado gave the Stunners a nice lead of 8-3 going into the technical timeout. The Stunners used the momentum coming out of the timeout as Nick Amado notched another kill, and an unfortunate error from Ryan Mathergave the Stunners a lot of leeway going into the next technical timeout at 15-9. Antwain Aguillard had a response after getting two kills but Chris Chappell’e responded with a kill and a block of his own, the score was 19-12 Stunners. The Ramblers attempted a response, but couldn’t really build momentum with kills from Brandon Rattray and Antwain Aguillard but it wasn’t enough to catch up to the Stunners. Final score 25-17

The Ramblers came into the second set a little more fired up than the first set, with multiple kills from Antwain Aguillard and Sean Dennis, and several errors from the Stunners such as a missed serve by Shayne Beamer and a missed set by Randy Morales, the Ramblers went into the technical timeout up 8-5. The Ramblers maintained a solid lead throughout the mid-match, with help from Brandon Rattray, notching two kills, and Nick Amado with two errors, they maintained a solid lead of 15-9. The Stunners then had a response, with three kills from Chris Chappell’e and a block from Randy Morales, they tied up the game at 17-17. Brandon Rattray responded with a huge kill but kills from Chris Chappell’e, Randy Morales, and Nick Amado gave the Stunners a lead of 22-20. An error by Brandon Rattray and a final kill by Chris Chappell’e gave the Stunners a win. Final score 25-22.

Set three was a little tighter than the two previous sets, with Stunners and Ramblers both exchanging aces, one from Shayne Beamer and one from Brandon Rattray. After the ace exchange they proceeded to continuously sideout until a kill by a missed serve by Sean Dennis gave the Stunners a lead of 8-6. The Stunners then made more mistakes, as Steven Duhoux notched another ace, tying the game at 10-10. Both teams exchanged points once again until at15-15 the Ramblers went on a run accompanied by a block and a kill from Brandon Rattray. The Stunners could not keep up as Antwain Aguillard and Brandon Rattray both got two kills and two blocks, which proceeded to give them momentum for the rest of the game. Final score 25-17 Ramblers.

Set four was similar to set three where both teams traded sideouts until a kill by Corey Chavers gave the Stunners a 8-7 lead going into the technical timeout. Coming out of the timeout Antwain Aguillard answered back with a huge kill, catching them up but a kill and an ace from Corey Chavers gave the Stunners a two point lead of 11-9. The Ramblers responded with their own energy, with a kill and an ace from Ryan Matherand a kill from Steven Duhoux, the Ramblers were able to steal the lead back at 14-12. Ryan Matherand Steven Duhoux of the Ramblers then committed two errors and a kill from Corey Chavers and an ace from Nick West tied the game up at 16-16. Both teams battled and sided out until Jair Santiago got hot with three kills and two aces from Nick Amado sealed the game 25-22 with the Stunners squeaking one out.

The OC Stunners look to go 3-0 on the weekend after going winless at Event 1 in San Bernardino. The Utah Stingers hope to bounce back from their two losses to the Ramblers and Team Freedom which both went to five sets. Nikola Dimitrijevic established his middles early, with Shayne Beamer scoring the first three points for the Stunners. Continuing the Middle sets, Nick West added some kills and a wild ace serve while Jair Santiago got into a good rhythm to keep the Stunners in front at 10-7. The Stingers responded well with high IQ plays from Jorge Mencia and good offensive distribution and defense from setter Leo Durkin. Although a tight battle, the Stunners finished the set strong with textbook triple blocks from Corey Chavers and high efficiency from Santiago.

Bringing Storm Fa’agata-Tufuga back into the match, the Stingers found early success. An excellent scramble dig from Romero, one-hand set from Alex Shmelev to a kill by Storm that left the Stunners rattled. But as the Stingers began to develop a lead, Santiago started to unleash meteors down the line into libero Kai Dugquem who had no fear as each swing ricocheted off his body. A powerful back-row attack by Fa’agata-Tufuga plus a massive block by Romero on Chavers pushed the Stingers to a strong lead in the final leg of the set. Two consecutive floats serve aces by Hamilton Day secured the position for the Stingers as they won the set 25-21.

Putting in a new lineup with setter Randy Ramirez, middle Nick Amado, and opposite Dillon Emery, the Stunners hoped to change the pace and correct for their loss in the last set. The Stingers middles Shmelev and Cory Metcalf showed their diverse skillset scoring a multitude of blocks and aces. Chavers and Romero began a battle of the pins in the latter part of the set as each tried to solidify their team’s lead, but both missed their service when it counted most. With an impressive commit block by Fa’agata-Tufuga on Nick West in the middle, the Stingers continued their domination and won the set 25-22.

Once again, making a significant lineup change, the Stunners return Joey Jarvis, Beamer, Santiago, and Dimitrijevic to the court. The players try once again to establish their team chemistry. Romero continued to be the outlet for the Stingers. At the same time, Chavers began to soar above the block, making out-of-system plays look like perfect sets. After calling a timeout with a Stingers lead of 18-14, the Stunners backcourt came to life with Joey Jarvis and Josh Ayzenberg keeping the team alive, allowing them to return and take the lead 24-22. The Stingers feeling the pressure, called a timeout and was able to tie the game again at 24-24 before their unforced errors let the Stunners win the set 27-25

The Stingers brought their a-game to start off the final set, with Romero starting off with an ace followed by Fa’agata-Tufuga hitting some fantastic shots over and through the Stunners sizeable blocks. As a characteristic of the Stunners so far in the event, Joey Jarvis is subbed for the youngest player Antonio Anguizola after Jarvis could not get any kills so far in the set. The substitution proved to be difficult, as the cold and unprepared Anguizola quickly made the serving target and aced off the court, with the Stingers leading 11-5. With Jarvis back on the court, Santiago on the service line, and West making clean transition kills, the Stunners made an astonishing return to get two points behind at 12-14. Just when it looked like the Stunners were about to pull off the impossible, Mencia swung a deep shot to the corner past the Stunners’ defense to end the game 15-13.