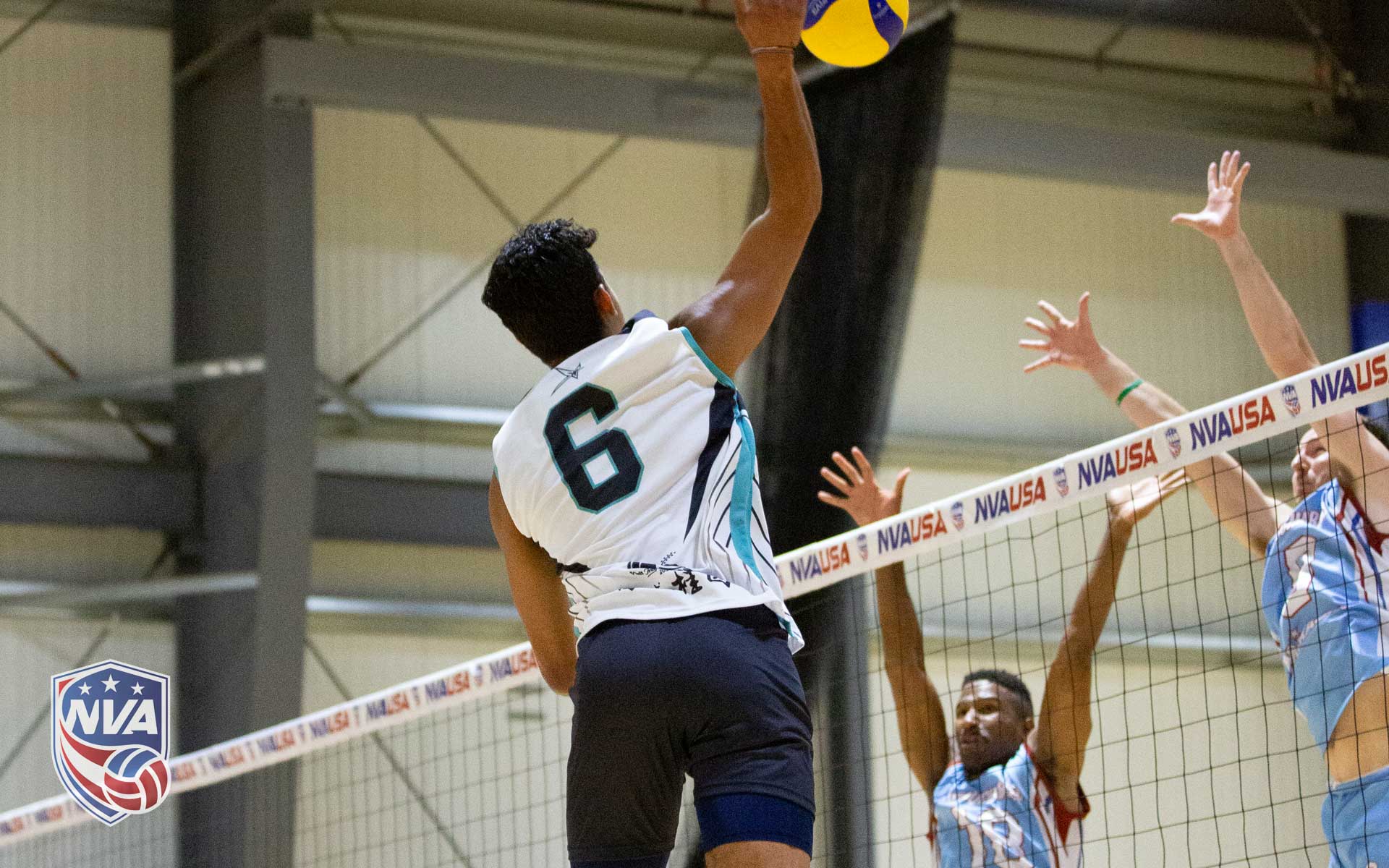 Before New Jersey the Stunners strengthen their roster with two new setters, #43 Nikola Dmitruevic and #27 Roberto Ramirez and a libero, Josh Ayzenberg to their roster.

Untouchables established the middle with a kill from #18 Thomas Burrell but quickly gave up the lead to the Stunners with a service and hitting error. Middle blocker #22 Nick Amado scored the first Stunners point on a block. Both teams battled back and forth until 4-4. A line kill by #7 Joey Jarvis, Untouchables’ hitting error and two consecutive service aces by Amado increased the Stunners’ lead to 8-4. After a kill by Untouchables’ middle blocker #20 Matt Buffum, the Stunners stared several mini runs on kills by Jarvis, #6 Cory Chavers and #9 Nick West and blocks by West and Chavers for a 16-9 lead. Scoring for Untouchables came from kills by Buffum, #9 Jake Milnaziak and #6 Eddie Keesecker. After the Stunners scored on a kill by #15 Jaire Sanchez-Santiago, the Untouchables only scored two points the rest of the set on Stunners’ service errors. The Stunners closed out the set with kill by Santiago, block by West and service ace by Jarvis. The set ended on a Untouchables’ hitting error 25-12.

Untouchables had a better start in set number two and took an early 6-3 lead on kills by Burrell, Milnaziak, Keesecker and Buffum. Stunners slowly cut the lead and eventually tied the set at 11-11 on kills by West, Chavers and Jarvis and blocks by West and Amado and service ace by Ramirez. A line kill by Jarvis gave the Stunners a 12-11 lead. But the Untouchables’ scrappy play helped them retake the lead at 15-14 from a tool by Milnaziak; and increased their lead to 23-20 after a cross court kill by Keesecker. The Untouchables won the set on a Stunners’ service error 25-22.

Stunners opened the third set with a 4-0 lead from a tip kill by Amado, two Untouchables’ hitting errors and a Santiago kill off of an Untouchable overpass. A Stunners’ service error killed the run and Milnaziak followed up with a service ace for a 4-2 score. Back-to-back service aces by Chavers increase the lead to 7-2. Untouchables rallied back with a three short scoring runs on kills by Keesecker, Burrell, and #15 Nick Ramos to cut the lead to 12-11. But Stunners kept their composure and increased their lead back to as many as five points at 20-15 after a West service ace. Untouchables attempted a rally with a service ace from #4 setter Ian Capp and kills by Burrell and Buffum but fell short. The set ended on a line kill by Jarvis 25-21.

Although the Untouchables scored first and took an early lead in the fourth set the Stunners dominated the set after a block by West gave them a 3-2 lead. Stunners increased their lead to 8-4 after kills by Santiago, West and Jarvis. Much of the Untouchables’ scores for the remainder the set came from the Stunners’ 7 service errors. The only real Untouchables’ points came from a service ace by Ramos and kills by Keesecker, Ramos, and Burrell. Stunners scored on kills by Chavers, Amado, Santiago and Jarvis. The set and match ended on an Untouchables’ service error.

Stunners’ Joey Jarvis and Untouchables’ Eddie Keeseckder led all players with 15 kills each. Followed by Stunners’ Cory Chavers and Jaire Santiago with 11 and Untouchables’ Thomas Burrell scored 9 kills and Jake Milnaziak with 7 kills.

The Blaze committed three hitting errors to start set number one and kills by Corey Chavers #6 and Jair Santiago #15 and serve ace by setter Nikola Dimitrijevic gave the Stunners a commanding 6-0 lead. The Blaze finally scored a clean point on a kill by #14 Jonathan Rodriguez. The Stunners managed to keep their 6-point lead for most of the match thanks to the way setter Dimitrijevic lead a balance offense. Everyone of the Stunners got in on the action either with a kill, service ace or block. Scores for the Stunners came from kills by #22 MB Nick Amado, Chavers, Santiago and #9 MB Nick West and #7 Joey Jarvis; and setter Dimitrijevic also scored on a dump. West contributed a block and Chavers Santiago each had a service ace. The Blaze did well to stay within reach of starting a rally and score points from kills by #1 Steven Morales, #5 MB Pedro Nieves, #12 Travis O’Gorman, #8 Pablo Guzman; dump by #16 setter Edison Zhou and Rodriguez service ace. After 21-14 the Blaze cut the lead to 21-17 thanks to O’Gorman kill, Rodriguez service ace and Stunners’ hitting error. But the Stunners sided out well the rest of the set on two kills by Chavers, Jarvis and West. The set ended on a hitting error by the Blazes that gave the Stunners a 25-21 win.

Stunners and Blaze battled back and forth in the second set with both teams siding out. The Stunners scored first on a an Amado block and Santiago kill to 2-0 and kept the lead throughout the match but never by more than 3 points. However, the Blaze did manage to tie the score six times but never found a way to take the lead. Blaze relied mostly on Morales with 5 kills and one block and Nieves with 3 kills. Nine Blaze points came from Stunners’ service and hitting errors. Stunners scored most of their points on kills by Santiago who had 7 kills. Amado and West each had 2 kills and one block; and #18 Matt Hilling who came off the bench for Chavers had two kills and a service ace. With the score 24-22 Blaze’s O’Gorman scored on a bic to cut the lead to 24-23. But the Stunners’ Santiago scored the next point on a kill for a 25-23 win.

Stunners scored the first point from a Blaze error. Blaze took their first lead after two consecutive Stunners’ hitting errors to 4-3. Stunners retook the lead with a mini run from a block by #3 MB Shayne Beamer, kill by Jarvis and Santiago ace to 8-6. After the Blaze cut the lead to 1 point, they took the lead back on consecutive scores by a Nieves and O’Gorman kills and Nieves block to 14-12. Blaze increased their lead to 16-13 after a Stunners’ hitting error. Stunners chipped away at the lead and tied the match 21-21 after a Hilling block. But the Blaze hung on to end the set on consecutive kills by Rodriguez and O’Gorman for a 25-23 win.

Stunners took the early lead in set number four from four mini runs and built a 5 point lead. The first included consecutive kills by Chavers, Jarvis. The second by West and Chavers. Third on kill by Chavers, service ace by West and another Chavers’ kill. The fourth from kills by Chavers, Amado and Santiago for a 13-8 score. Blaze scored on their points from three Stunners’ service errors and kills by Guzman and Morales and block by Nieves. Blaze picked up their defense and slowly chipped away at the Stunners’ lead and tied the score at 24-24 after a Morales kill and then took the lead on an O’Gorman service ace to 25-24. Stunners sided-out and tied the score  until 26-26. But the Blaze won the set after a Nieves block and O’Gorman kill 28-26.

Blaze took a 3-0 lead from a Stunner’s hitting error, Zhou service ace and Morales block. Stunners tied the score after two Blaze hitting errors and block by Amado to 3-3. Blaze and Stunners exchanged leads. At 9-9 Stunners took a lead they’d never give up after a Chavers cross court kill and increased their lead to 3 points after a Blaze error and Santiago kill off the block to 12-9. Blaze rallied to cut the lead to 14-13 after a Stunner hitting error and kill by Rodriguez to 14-13. Stunners won the match from a Blaze service error 15-13.

Stunners Sweep and Ruin Tornadoes’ Late Run for the Playoffs

Stunners scored the first point on a kill by #15 Jair Sanches-Santiago and took a 3-0 lead after a Tornadoes’ hitting error and kill by #6 Corey Chavers. The Tornadoes scored their first point on a block by #5 Sean Smith for a 3-1 score. The Untouchables tied the score at 4-4 after a kill by #20 Felix Chapman and dump by setter #19 Michael Quinones. Stunners countered with their own mini run on kills by #3 Shayne Beamer and #7 Joey Jarvis and kept a 2-point lead. Although the Stunners sided-out well they gave free points to the Tornadoes on service and hitting errors that kept the score close. But the Stunners slowly increased their lead on back-to-back scoring runs from #12 Kevin Gear and Santiago to 8-5; Beamer and Chavers to 13-9; and Santiago and Chavers to 15-10. During this run Tornadoes scored most of their points from Stunners’ hitting and service errors. And only scored 5 clean points from a Quinones service ace and two kills by Chapman, a kill by #69 Steven Roschitz and a kill by #11 MB Aaron King. At 23-18 the Stunners closed out the set with a kill by Chavers, block by Jarvis and won the set on a kill by Jarvis 25-19.

Tornadoes scored the first point on a kill by Chapman. Stunners scored their first point on a kill by Beamer and tied the score 2-2. Tornadoes took the lead on a kill by #18 Carlos Luna. Stunners tied the score and took a 1-point lead after a Santiago kill, service ace by #27 Roberto Ramirez and Chavers’ kill to 9-8. After a Gear tied the score at 13-13 on a kill, Tornadoes regained the lead on a dump kill by setter Quinones. The Stunners retook the lead after a Tornadoes hitting error and Santiago kill to 17-15. But the Tornadoes regained the lead again from two consecutive kills by Chapman and block by Quinones to 19-18. Tornadoes kept the lead until the Stunners took it back again at 22-21 after a Chavers’ kill and Tornadoes’ hitting error. Two errors in a row by both teams led to a 22-22 tie. Chavers scored a kill on the next possession for a 23-22 Stunners’ lead. The Stunners won the set on two consecutive Tornadoes’ hitting errors 25-22.

Stunners’ Corey Chavers and Tornadoes’ Felix Chapman led all players with 15 kills. Jair Sanchez-Santiago had 14 kills, Shayne Beamer 6 kills and Kevin Gear and Joey Jarvis each had 5 kills. The next Tornadoes with the most kills behind Chapman were Steven Roschitz with 3 kills and Aaron King and Michael Quinones with 2 kills each. The Stunners also scored on 3 service aces and 4 blocks. And Tornadoes on 1 service ace and 3 blocks.